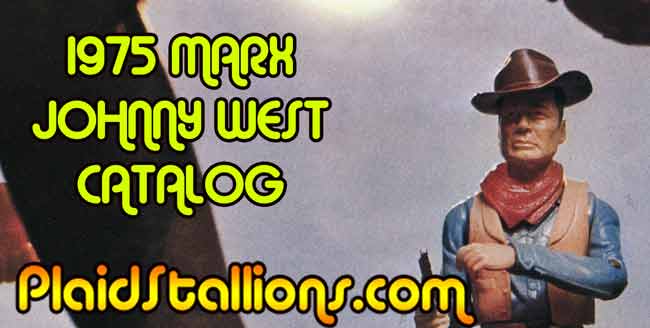 Like G.I. Joe, Johnny West was one of the few hold over action figure lines from the 1960’s. This durable (hell indestructable) cowboy figure line was looking a little strange on a shelf now populated by Superheroes, Aliens and talking apes but he managed to kick around for at least one more year.

The line was bulging with characters this year and the figures now had “Quick Draw Action” which was pretty neat. Someone still needs to explain how they got a jeep back in the old west….. Nothing like an atmospheric gun fight shot to start your catalog, the child to the right is illustrated by the great Jack Davis, he did a few Marx Catalogs. Johnny’s cast of characters had really grown in 1975. Someone explain the Jeep to me, I thought this was the old west? These store displays are amazing, the only thing I remember seeing on a shelf was the carry case.. These weird Water Pistols remind me of something put out by AHI. If you use coca cola instead of water, it’ll look like they’re spitting chewin’ tabbacky!