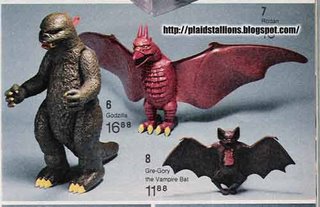 Fooling around through the 1980 JC Penney Catalog I came upon the Tri-fecta of evil, the three toys I wanted more than anything but never recieved.

They are, in order, Mattel’s Godzilla from the Shogun Warriors line, Rodan also from said line and the third and possibly worst of them all Gre-Gory.

There is probably nothing I wouldn’t have done to get these three, there would have been blood on the playground people…..
Godzilla was the only one of them I ever saw at retail, my friend had one so there are some fond memories, it’s Gre-Gory and in particular the ad below that I remember best. 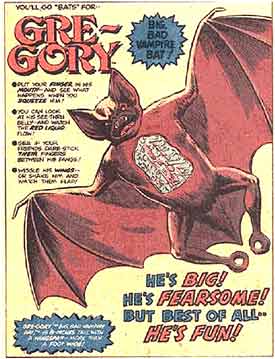 One day while perusing a comic (probably Marvel’s Star Wars) I saw this ad and went directly to Woolco armed with Grandma, they didn’t have it. Mattel Canada never carried the thing.. After 20 years of toy collecting, I’ve never even seen one of these things up close.

Today I own that Godzilla and Rodan but it’s sort of hollow, my main childhood memory is wanting them, not playing with them. I let my son fool around with my Shogun Warriors now because he has a lot of fun with them.

On an unrelated note, I found this incredible early eighties toy store commercial on you tube, I had heard of this store from collectors before, looks like it was awesome, they probably carried Gre-Gory………