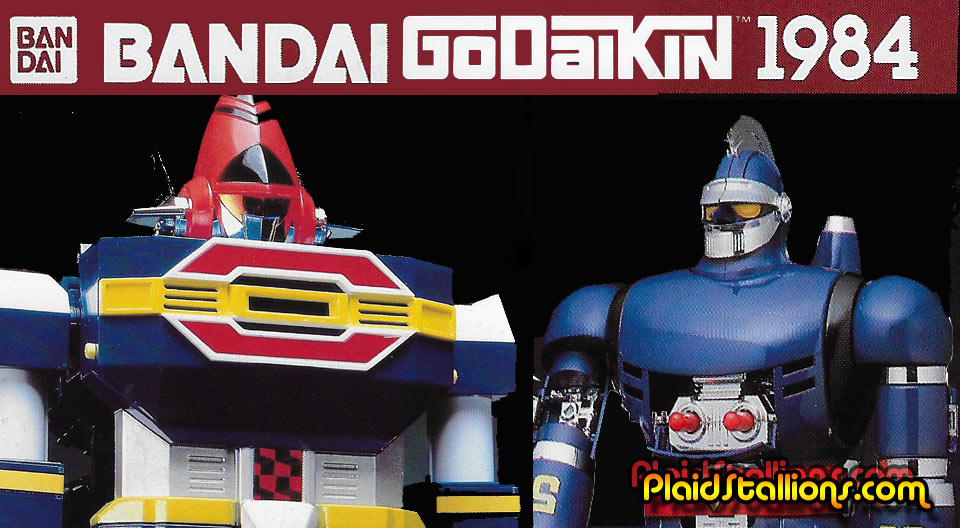 After Mattel ceased production of the Shogun Warriors brand in 1980, Popy’s parent company Bandai decided to forge ahead and market their characters in the United States themselves. They branded the line of diecast robots GoDaikin which combines the Japanese words for alloy “gokin” with the word for big “Dai”.

Many of the characters chosen for the line were based on television shows that US children had never seen .

The line was beautiful but also premium priced due to high costs of importation, I certainly remember drooling over the GoDaikins at my local hobby shop but they were on the top shelf and over $75(!).

This catalog is from 1984, a year when the line would be overshadowed by two competing Japanese lines being marketed in America, Transformers by Hasbro and GoBots by Tonka, both of which were lower priced and had slick marketing campaigns, including animated series.

As with a lot of unappreciated toy lines, GoDaikins command a high value on the secondary market and are highly collectible. It’s interesting to note that this catalog has a transforming robot right on the cover, as that would be the hottest toys of Christmas 1984. Lightspeed Electroid Albegas (光速電神アルベガス, Kōsoku Denjin Arubegasu) is an anime series that aired from 1983 to 1984 in Japan, Latin America, Spain and Italy. According the many, this was the least popular item in this line. Kagaku Sentai Dynaman (科学戦隊ダイナマン, Kagaku Sentai Dainaman) is the seventh installment of Toei Company’s Super Sentai show and a direct ancestor to Power Rangers, it also saw broadcast in the United States however it was a parody series under the Night Flight banner. GOLION (百獣王ゴライオン, Hyaku Jūō Goraion, The King of Hundred Beasts GoLion) is known to most US children as Voltron and from what i understand was the most popular seller. I’m not sure how this affected Matchbox who was also bringing in Voltron toys.

Space Emperor God Sigma (宇宙大帝ゴッドシグマ, Uchū Taitei Goddo Shiguma) is a mecha anime television series aired from 1980 to 1981. It ran for 50 episodes. It is also referred to as “God Sigma, Empire of Space” and “Space Combination God Sigma”. Future Robot Daltanious (未来ロボ ダルタニアス, Mirai Robo Darutaniasu) is an anime television series which aired from 1979 to 1980, produced by Toei Animation, with animation produced by Sunrise.

Gordian Warrior (闘士ゴーディアン, Tōshi Gōdian) is a Japanese anime television series that aired in 1979 to 1981. It is also referred to as Champion of Gordian or Gardian Denshi Sentai Denjiman (電子戦隊デンジマン, Denshi Sentai Denjiman) is Toei’s fourth entry to its Super Sentai metaseries. It was broadcast from February 2, 1980 to January 31, 1981. The title given to this series for international distribution by Toei is Denjiman, Electric Fighters.

Daitetsujin 17  (大鉄人１７, Daitetsujin Wan-Sebun) is a 1977 tokusatsu series created by Shotaro Ishinomori and produced by Toei. It revolves around a giant battle robot commanded by a young boy who fights the giant robots of an evil organization bent on world conquest. It was released in North America as “Brain 17” but directly to video by Playhouse in the mid 1980s. Taiyo Sentai Sun Vulcan (太陽戦隊サンバルカン Taiyō Sentai San Barukan, translated into English as Solar Squadron Sun Vulcan) is Toei’s fifth entry to its Super Sentai series. It is a direct predacessor to Power Rangers and Popy also created a series of  World Heroes figures based on the show.

Dai Sentai Goggle-V (大戦隊ゴーグルファイブ, Dai Sentai Gōguru Faibu, also called Dai Sentai Goggle Five)[Note 1] is a Japanese tokusatsu television series. It is yet another predecessor to what would largely be known as “Power Rangers” in North America. Tetsujin 28 was better known as Gigantor to North American kids, although in 1984 most kids probably wouldn’t have been as familiar with him. Leopardon is the giant Mech that belongs to Spider-Man in Japan, based on Toei’s popular take on the character. Leopardon also had a cameo in the Shogun Warriors line. Transforming watches were everywhere by 1985, it’s not a surprise these got somewhat lost in the shuffle.