It's a good time to be a child of the 70's, one of the best and previously mishandled libraries of Saturday morning TV is finally getting it's due.

Growing up, there was one name that truly made me giddy and that was Filmation. No offense to those who worship at the altar of Sid and Marty Krofft, they made quality programs but I was always dazzled by the efforts of Filmation. I finally got to explain this when i met Lou Scheimer a while back. 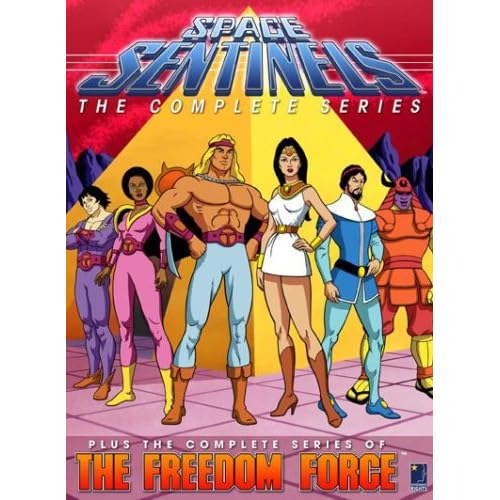 Which brings me to my first set that I had to have, the Freedom Force Space Sentinels boxed set. Merging these two series was a great idea seeing as they have a linked character (Hercules)

I have nothing but fond but fuzzy memories of Space Sentinels, the story of three young people transported to an alien planet and returned to earth with amazing powers. Originally titled "The Young Sentinels", the series follows the adventures of Hercules, Mercury and Astria. The show has a progressive multi-cultured cast and offers the classic filmation animation, stories and music.

Extras include the test reel, a live action pilot (which seems like a bit like bad theatre) and some commentary. I haven't seen the show in nearly twenty years but it's still held up nicely.

Freedom Force is a very welcome spin off from Space Sentinels, it follows the adventures of Hercules, Merlyn, Super Samurai, Sinbad and ISIS (Yes, Oh Mighty Isis!) in the Valley of time. Freedom Force was part of another series (Tarzan and the Super Seven) so there weren't many shorts. If I had to pick a favourite Filmation series this would be a close second to Tarzan, the only problem is there are less than ten episodes, bummer.

This set is great for kids, I was elated to find my son was a huge fan of Super Samurai, my favourite character as well. You can buy this whole set for under $20, take that Star Trek! Well worth the money!